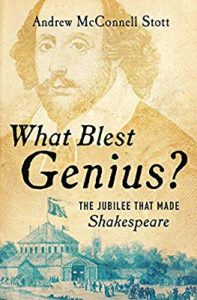 Andrew McConnell Stott is the author of four non-fiction books, the most recent is What Blest Genius?: The Jubilee that Made Shakespeare, which tells the story of three strange days in 1769 that established William Shakespeare’s reputation as the greatest writer of all time. What Blest Genius? was a New York Times Book Review “Editor’s Choice” and book of the year for both the London Evening Standard and The Sunday Times. Reviewing it for The Sunday Times, Simon Callow wrote that Stott “has an uncommon gift for reporting on the past as if it had happened yesterday, and to him personally.” Previous highly acclaimed books by Stott include Comedy, The Pantomime Life of Joseph Grimaldi, The Poet and the Vampyre: The Curse of Byron and the Birth of Literature’s Greatest Monsters. The Pantomime Life of Joseph Grimaldi won the Royal Society of Literature Jerwood Prize for Non-Fiction, the Sheridan Morley Prize for Theatre Biography, the George Freedley Memorial Award, and a BBC Radio 4 “Book of the Week”. The Poet and the Vampyre was a book of the year for both The Big Issue and The Sunday Times, and one of Chloe Sevigny’s favorite things. Stott is the recipient of fellowships from the British Academy, the Huntington Library, the American Council on Education, and the New York Public Library’s Cullman Center for Scholars and Writers. He is a Professor of English at the University of Southern California.