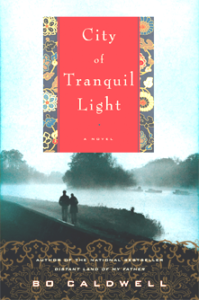 Bo Caldwell’s first novel, The Distant Land of My Father, was a national bestseller, one of the Los Angeles Times’ Best Books of 2001, and was the City of Pasadena’s 2007 One City, One Story book.  Her second novel, City of Tranquil Light, was a Los Angeles Times bestseller and an October 2010 Indie Next Notable.  Her personal essays have appeared in O and the Washington Post Magazine among others, and her short stories have been included in Story, Ploughshares, and Epoch.  She graduated from Stanford University where she later held a Wallace Stegner Fellowship and a Jones Lectureship in Creative Writing.  She has received a fellowship in literature from the National Endowment for the Arts, an Artist Fellowship from the Arts Council of Santa Clara County, the Georgia Shreve Prize in Fiction at Stanford University, and the Joseph Henry Jackson Award from the San Francisco Foundation.  She lives in Northern California with her husband, novelist Ron Hansen.