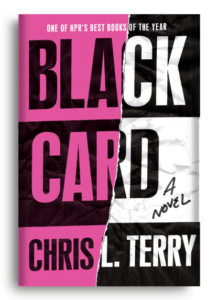 Chris L. Terry is the son of an African-American father and an Irish-American mother and he describes Senna’s book, Caucasia, as “a formative read” for him as a young man. He was born in Boston, raised in Richmond, Virginia and spent his youth touring the US and Europe as a singer for various punk rock bands. He has a BA from Virginia Commonwealth University and a Creative Writing MFA from Columbia College, Chicago. In the past, he has worked in book publishing and taught creative writing to juvenile inmates. His debut novel, Zero Fade, was on the American Library Association’s Best of 2013 list. His second novel, to be published in 2019, is a supernatural satire about a mixed-race punk rock musician who is trying to win his Black Card — his credibility as a black person.  A resident of LA since 2013, he is currently a PEN Center USA Artist in Residence.