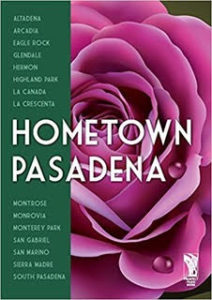 Colleen Dunn Bates is a publisher, founder, editor, and longtime Pasadena resident who started her career by studying journalism at USC. In 2006, she started Prospect Park Books with the publication of Hometown Pasadena. Hometown Pasadena’s first two editions won acclaim from the Los Angeles Times, Los Angeles Magazine, and Westways, as well as nominations and awards from the Southern California Independent Booksellers Association and the Independent Publisher Book Awards. Hometown Pasadena has been out of print for a few years, but a new edition will be coming Fall 2017. Written by longtime locals who dig deep to reflect the areas they find so special, this witty, richly colorful book unlocks the insider secrets of the San Gabriel Valley including Sierra Madre, Altadena to South Pasadena, and Old Pasadena.