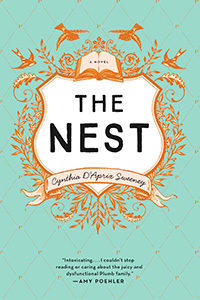 Cynthia D’Aprix Sweeney burst on the literary scene with her sensational debut novel, The Nest. An instant New York Times bestseller, The Nest is scheduled to be made into a movie. Cynthia received her MFA from The Bennington Writing Seminars. Previously, she lived and worked in New York City for more than two decades, writing copy for a variety of clients, including American Express, McDonald’s and more defunct internet start-ups than she cares to count. Her non-fiction essays have been published in The New York Times Magazine and Martha Stewart Living. She lives in Los Angeles with her husband and two sons.

“The Nest is an addictive, poignant read with an enticing premise.” – Los Angeles Times. “By turns winsome, biting, and addictive.” – New York Magazine.