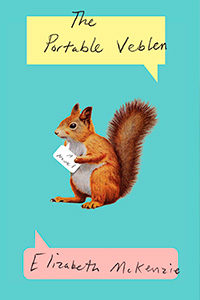 Elizabeth McKenzie is the author of The Portable Veblen, shortlisted for the Baileys Women’s Prize for Fiction 2016. She also wrote Stop That Girl, shortlisted for The Story Prize, and MacGregor Tells the World, a Chicago Tribune, San Francisco Chronicle and Library Journal “Best Book of the Year.” Her work has appeared in The New Yorker, The Atlantic Monthly, Best American Non-required Reading, The Pushcart Prize Anthology, and was recorded for NPR’s Selected Shorts. She has an MFA from Stanford. She is the senior editor of the Chicago Quarterly Review and the managing editor of Catamaran Literary Reader. Elizabeth lives in Santa Cruz, California.

The New York Times called The Portable Veblen, “A novel of such festive originality that it would be a shame to miss.” The Los Angeles Times agreed, saying, “The Portable Veblen has the feel of an instant, unlikely classic.”