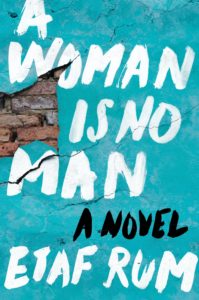 In her debut novel, A Woman Is No Man, Etaf Rum offers an intimate glimpse into the controlling and closed cultural world inhabited by three generations of conservative Arab American women. A Woman is No Man is a story of culture and honor, secrets and betrayals, love and violence. A Woman is No Man has been named a New York Times Book Review Editors’ Choice, an Amazon Best Book of the Year, a Marie Claire Best Women’s Fiction of 2019 and an Electric Lit 20 Best Debuts of the First Half of 2019.

Rum was born in Brooklyn, New York, to Palestinian parents. She has an MA in American and British Literature as well as undergraduate degrees in Philosophy and English Composition from North Carolina State University. Rum runs the Instagram account @booksandbeans and is a Book of the Month Club Ambassador, where she writes about her favorite books each month. She lives and teaches in North Carolina.

“Garnering justified comparisons to Khaled Hosseini’s A Thousand Splendid Suns… Etaf Rum’s debut novel is a must-read about women mustering up the bravery to follow their inner voice.” — Refinery 29.