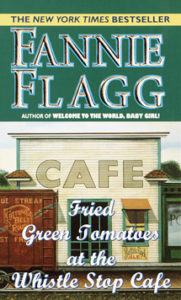 Fannie Flagg was first known as a television personality and wrote and appeared on the classic series, “Candid Camera.”  Her first novel, Daisy Fay and the Miracle Man, was on the New York Times best seller list for 10 weeks.  Her second novel, Fried Green Tomatoes at the Whistle Stop Café, was on the prestigious list for 36 weeks and was made into a hit motion picture starring Jessica Tandy and Kathy Bates.  Fannie also wrote the film’s screenplay which was nominated for an Academy Award, a Writers Guild of America Award and it won the Scripter Award for best screenplay of the year.  Her other books include:  Welcome to the World, Baby Girl!, Standing in the Rainbow, A Redbird Christmas and Can’t Wait to Get to Heaven.  Her newest book is titled I Still Dream About You.  Fannie happily splits her time between California and Alabama.