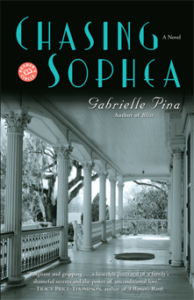 Gabrielle Pina is an award-winning fiction writer and novelist.  She won the 2002 Pacificus Foundation Literary Prize for achievement in short fiction.  She published the short story, Uncommon Revelations, for the ESI Anthology which was recently re-released by Amazon Shorts.  Her first novel, Bliss, grew out of her thesis project.  Her second novel, Chasing Sophea, was released in 2006 and has become a book club favorite.  Pina is a faculty member at the University of Southern California’s Master of Professional Writing Program, where she also received a Master of Arts degree, and she is an adjunct English professor at Pasadena City College where her innovative curriculum addresses the graduation rate of African American students on college campuses.  She has written Letters from Zora:  In Her Own Words, a play that showcases the artistic and literary triumphs of Zora Neale Hurston.  Gabrielle lives in Southern California with her husband and three children.