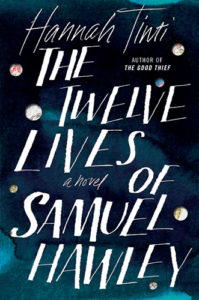 In The Twelve Lives of Samuel Hawley, a father protects his daughter from the legacy of his violent past and the truth about her mother’s death. A thrilling tour de force, Hannah Tinti’s second novel has been optioned for television. Her first novel, The Good Thief, was a New York Times Notable Book, and won The Center for Fiction’s First Novel Prize, the ALA Alex Award, and the Quality Paperback’s New Voices Award. Her short story collection, Animal Crackers, was a runner-up for the PEN/Hemingway Award.

Tinti teaches at NYU’s Graduate Creative Writing Program, Columbia’s MFA Program, CUNY, and the Museum of Natural History. She is Executive Editor of the award-winning magazine One Story, which she co-founded, and Literary Commentator of the Public Radio program, Selected Shorts. Hannah lives in Brooklyn, New York.

“Tinti depicts brutality and compassion with exquisite sensitivity . . .” – The New Yorker. “The book has an irresistible velocity that Ms. Tinti sustains to the end.” – The Wall Street Journal