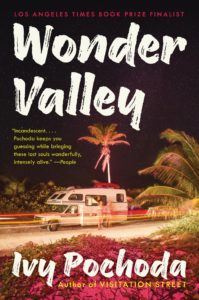 The lives of six characters, each running from some desperate chapter in their lives, intersect against the sun-bleached canvas of Los Angeles in Ivy Pochoda’s new novel, Wonder Valley.  Pochoda takes the reader from the Mojave Desert to the Pacific, from the 110 to Skid Row, in a story where place is its own character. Wonder Valley was named an NPR Best Book of 2017, a Los Angeles Times Best Fiction Pick, a Refinery29 Best Book of the Year, and a BOLO Books Top Read of 2017. Pochoda is the author of two other novels, The Art of Disappearing and Visitation Street.

Pochoda grew up in Brooklyn. She has a BA from Harvard College and an MFA from Bennington College and was a world ranked squash player. She lives with her family in Los Angeles, where she teaches creative writing at the Lamp Arts Studio in Skid Row.