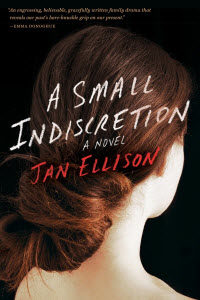 Jan Ellison’s debut novel, A Small Indiscretion was both an Oprah Editor’s Pick and a San Francisco Chronicle Book Club Pick. Jan’s essays and stories have appeared in The New York Times, The Wall Street Journal, Narrative Magazine and elsewhere. She received an O. Henry Prize for her first short story to appear in print. Jan has an undergraduate degree from Stanford University and an MFA from San Francisco State. She had a brief career in her twenties at a Silicon Valley startup, marketing risk management software to derivatives traders. The company went public, Jan became a mother, and instead of leaning in she leaned out, became a stay-at-home mom, and began to write. She lives in the San Francisco Bay Area with her husband and their four children.

The Huffington Post said of A Small Indiscretion, “Part psychological thriller, part character study, I peeled back the pages on this book as fast as I could,” while Flavorwire raved, “The plot explodes delightfully, with suspense and a few twists . . . both juicy and beautifully-written.”