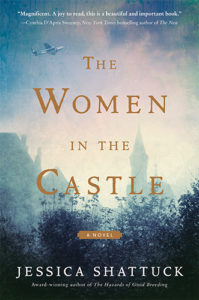 The Women in the Castle was inspired by author Jessica Shattuck’s knowledge that her grandmother was a Nazi. Set at the end of World War II, in a crumbling Bavarian castle that once hosted all of German high society, The Women in the Castle is the propulsive story of three widows whose lives and fates become intertwined. Shattuck’s other novels include Perfect Life and The Hazards of Good Breeding, a New York Times Notable Book and finalist for the L.L. Winship/PEN Award.

Shattuck’s writing has appeared in The New York Times, The New Yorker, Glamour, Mother Jones, Wired, and The Believer. A graduate of Harvard University, she received her MFA from Columbia University. Shattuck now lives with her husband and three children in Brookline, MA.

“Moving . . . surprises and devastates.” – The New York Times Book Review. “A masterful epic.” – People. “Mesmerizing . . . The Women in the Castle stands tall among the literature that reveals new truths about one of history’s most tragic eras.” – USA Today