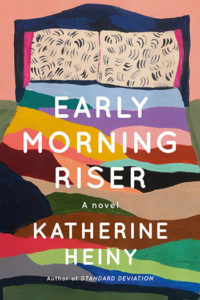 In Katherine Heiny’s Early Morning Riser, young Jane falls in love with Duncan easily. He is charming, good-natured, and handsome but unfortunately, he has also slept with nearly every woman in Boyne City, Michigan. Although Jane eventually comes to terms with dating the world’s most prolific seducer of women, she wishes she did not have to share him quite so widely. Then, any notion Jane had of love and marriage changes with a terrible car crash. Bitter sweet and laugh-out-loud funny, Early Morning Riser is a Good Morning America Buzz Pick.

Heiny is the author of Standard Deviation and a story collection, Single, Carefree, Mellow. Her fiction has been published in, among others, The New Yorker, The Atlantic, Ploughshares, and Glimmer Train. She lives in Bethesda, Maryland with her husband and children.

“I’d read the back of a cereal box if it was written by Katherine Heiny.”—Forbes. “A deep awareness of the ways the potential for tragedy lies just beneath the surface of small-town life. . .holds the humor in perfect balance.” –Publisher’s Weekly. “The story. . .sparkles with Heiny’s trademark witticisms and cutting observations.” – Washington Post