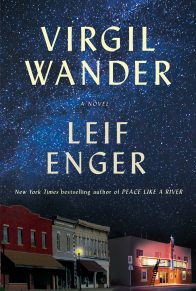 Leif Enger grew up in Osakis, Minnesota and was a reporter, writer, and producer for Minnesota Public Radio before writing his bestselling debut novel Peace Like a River, which won the Booksense Award for Fiction and was named one of the Year’s Best Books by Time Magazine and the LA Times. Following this success, Enger published his second novel, So Brave, Young, and Handsome, which was also a national bestseller. In 2018 Enger released his most recent book, Virgil Wander, a midwestern twist on magical realism about a town—and its inhabitants—struggling for a new lease on life, which the New York Times Book Review praises as “a lush crowd-pleaser about meaning and second chances and magic… just the kind of book and protagonist we’re all searching for.”