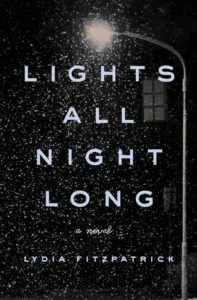 In Lights All Night Long, fifteen-year-old Russian exchange student, Ilya, arrives in America consumed by the need to prove his older brother innocent of the three murders he is accused of back home. With the help of an American girl, who has secrets of her own, he fights to clear his brother’s name and find the real killer.  Fitzpatrick’s work has appeared in The O. Henry Prize Stories, The Best American Mystery Stories, One Story, Glimmer Train and elsewhere.

Fitzpatrick received her BA from Princeton University and her MFA from the University of Michigan, where she won a Hopwood Award for short fiction. She was a Wallace Stegner Fellow at Stanford University, a fiction fellow at the Wisconsin Institute for Creative Writing, and a recipient of an Elizabeth George Foundation grant. She lives in Los Angeles.

“A luminous debut. . . Fitzpatrick does so many things right in Lights All Night Long, it’s hard to believe it’s a debut novel.” — Los Angeles Times. “The bonds of family and homeland—new and old—are tested in this sexy and pensive thriller.”— The Observer.