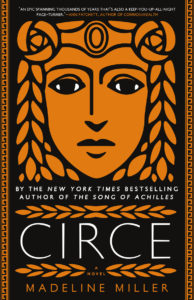 In Circe, the much-anticipated follow-up to her bestselling novel, The Song of Achilles, Madeline Miller recasts the infamous sorceress of Greek myth as a hero in her own right. Circe was shortlisted for the Women’s Prize for Fiction 2019 and selected as a Book of the Year by Time Magazine, the Washington Post, Buzzfeed, the Guardian, Times Literary Supplement and Refinery29.  Miller’s first novel, The Song of Achilles, won the Orange Prize for Fiction.

Miller grew up in New York City and Philadelphia. She earned her BA and MA at Brown University and studied at the University of Chicago and Yale School of Drama. She has taught and tutored Latin, Greek and Shakespeare to high school students for more than fifteen years. She lives outside Philadelphia.

“Circe, [is] a bold and subversive retelling of the goddess’s story that manages to be both epic and intimate in its scope.” — New York Times. “So vivid, so layered, you could get lost in it . . . this is just great storytelling.” — NPR’s Here & Now.