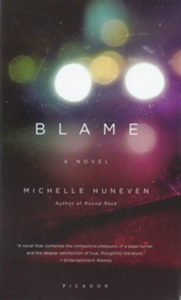 Michelle Huneven received an M.F.A. at the Iowa Writer’s Workshop and her first published story won a G.E. Younger Writers Award and was republished in Harper’s Magazine.  Round Rock, her first novel, was a New York Times Notable Book and one of the LA Times Best 100 Books of the year.  Her second, Jamesland, was also a New York Times Notable Book, a Book Sense pick and a winner of the Southern California Booksellers Award for Fiction.  Blame, her third novel, was nominated for a 2009 National Book Critics Circle Award, and all three of her novels have been nominated for Los Angeles Times Book Prizes.  Michelle was also an award-winning restaurant critic and food writer for the LA Times and the LA Weekly and has also written journalism for the New York Times, Gourmet, O and many other periodicals.  She currently lives with her husband in Altadena, where she was born and raised.