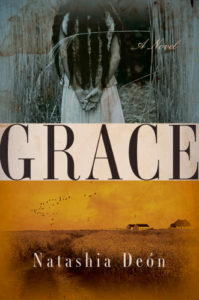 In her debut novel, Grace, Natashia Deón explores racism, abuse, freedom, love and motherhood in the story of escaped slave Naomi and her daughter during the Civil War years and before.  Grace was awarded a 2017 First Novel Prize by the American Library Black Caucus and was named a New York Times Top Book, a Kirkus Review Best Book, a Book Riot Favorite Book, The Root Best Book, and an Entropy Best Book.

A practicing attorney, law professor, and creator of the Los Angeles-based reading series, Dirty Laundry Lit, Deón lives in Los Angeles with her husband and two children. She is a recipient of a PEN Center USA Emerging Voices Fellowship, and has been awarded fellowships and residences at Yale University, Bread Loaf, and the Prague Creative Writing Program. She has an MFA from the University of California at Riverside-Palm Desert.

“[A] haunting portrait of slavery, love and violence.” – Newsday. “With her debut novel, Natashia Deón has announced herself beautifully and distinctively.” – The New York Times