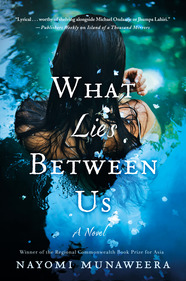 Nayomi’s first novel, Island of a Thousand Mirrors, was long-listed for the Man Asia Literary Prize and won the Commonwealth Regional Prize for Asia. Her new novel, What Lies Between Us, is set in the idyllic hill country of Sri Lanka, where a young girl grows up surrounded by her loving family. When tragedy strikes, she and her mother seek safety by immigrating to America. There the girl reinvents herself as an American teenager, but even as she assimilates and thrives, the secrets of her past follow her into adulthood. When the past and the present collide, she sees only one terrible choice. Nayomi earned her B.A. from the University of California, Irvine and her Master’s from the University of California,