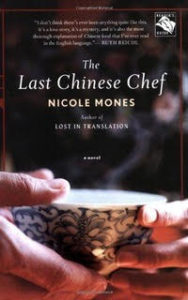 Nicole Mones is an American novelist and food writer. She has published four novels including Lost in Translation (1998), A Cup of Light (2002), The Last Chinese Chef, (2007), and Night in Shanghai (2014).  Lost in Translation won the 2000 Janet Heidinger Kafka Prize awarded by the Susan B. Anthony Institute for Gender and Women’s Studies. It also received the Pacific Northwest Annual Book Award, a five-state prize. The Last Chinese Chef was the only American finalist for the international Kiriyama Prize and also a World Gourmand Award winner in the Chinese cookbook category, although it is a novel with no recipes. Mones’ novels have been translated into 17 languages. She also contributes articles about Chinese cuisine to Gourmet magazine, and has written for The New York Times Magazine, The Washington Post, and The Los Angeles Times. Mones currently lives in Portland, Oregon.     (144 words)