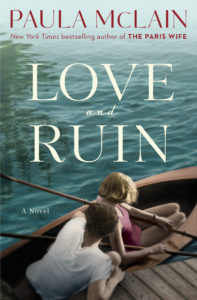 From the author of The Paris Wife comes another bestselling novel, Love and Ruin. McLain tells the story of Martha Gellhorn, who smashed social and professional taboos to become one of the greatest war correspondents of the 20th Century, all while negotiating her other starring role as the third wife of literary and cultural lion Ernest Hemingway.   McLain has published three other novels, A Ticket to Ride, The Paris Wife (which became a fixture on The New York Times bestseller list) and Circling the Sun, as well as two collections of poetry, and a memoir, Like Family:  Growing Up in Other People’s Houses, which describes her life as a child in the California foster care system.

McLain was born in Fresno, California. After aging out of the California foster care system, and before discovering she had the desire and talent to write professionally, she worked as a nurses’ aide, pizza delivery girl, cocktail waitress and an auto-plant worker.  She received her MFA in poetry from the University of Michigan in 1996. She lives with her family in Cleveland.

“McLain does an excellent job portraying a woman with dreams who isn’t afraid to make them real.” – The New York Times Book Review. “McLain’s legions of fans will relish the inspiration of a gutsy woman who discovers she doesn’t need a man at her side, after all.” – The Boston Globe.