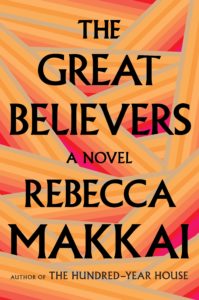 The Great Believers is a dazzling novel of friendship and redemption in the face of tragedy and loss. Rebecca Makkai takes us on an emotional journey from 1980s Chicago to contemporary Paris, as she explores the AIDS crisis and its residual effects on the lives of survivors. Makkai has written two other novels, The Hundred-Year-House, and The Borrower, as well as a short story collection, Music for Wartime. The Great Believers is a finalist for the 2018 National Book Award for Fiction.  Makkai’s short fiction won a 2017 Pushcart Prize and was chosen for The Best American Short Stories for four consecutive years.

Makkai received her BA from Washington and Lee University and her MA from Middlebury College. The recipient of a 2014 NEA fellowship, she is on the MFA faculties of Sierra Nevada College and Northwestern University and is the Artistic Director of StoryStudio Chicago. Makkai taught at elementary Montessori schools for 12 years prior to publishing her first novel.  Now the mother of two young daughters, Makkai makes her home in Chicago.

“Engrossing…thrilling and beautiful to behold.” – The Boston Globe. “Symphonic…The Great Believers soars…magnificent…” – The Chicago Tribune. “An absorbing and emotionally riveting story about what it’s like to live during times of crisis.” – The New York Times Book Review.