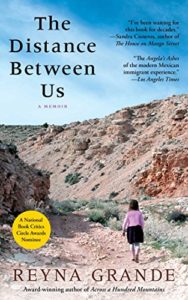 Reyna Grande’s first novel, Across a Hundred Mountains (2007) received the Premio Aztlán Literary Prize and the American Book Award. It draws heavily on her experiences of growing up in Mexico and as an undocumented immigrant in the U.S. This novel has been selected five times as a community read. Grande’s second novel, Dancing with Butterflies (2009), received the 2010 International Book Award. Grande’s most recent novel, The Distance Between Us (2012), her memoir, was a finalist for the National Book Critics Circle Award. It was selected for 14 community reads between 2013-2017. Grande was recognized in 2015 with the Luis Leal Award for Distinction in Chicano/Latino Literature. A past resident of Pasadena, Grande attended Pasadena City College, later transferring to UC Santa Cruz, where she obtained a B.A. in literature/creative writing. She later received her M.F.A. in creative writing from Antioch University. Grande is a member of the prestigious Macondo Writers Workshop, the workshop founded by Sandra Cisneros. She has taught creative writing at UCLA Extension’s Writer’s Program, at VONA (Voices of Our Nation’s Arts), the Latino Writer’s Conference.