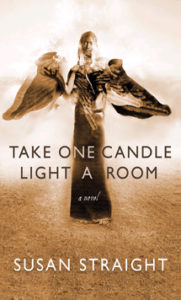 Susan Straight’s latest novel, Take One Candle Light a Room, was named one of the best novels of 2010 by The Washington Post, The Los Angeles Times and Kirkus.  Her novel, Highwire Moon, was a finalist for the 2001 National Book Award, and her book, A Million Nightingales, was a 2006 finalist for the LA Times Book Prize.  Her short story, “The Golden Gopher,” – a chapter in the book Los Angeles Noir – won the 2008 Edgar Award for Best Mystery Story.  Susan has published stories and essays in The New York Times, The Los Angeles Times, Harpers, Salon, Zoetrope, McSweeneys, The Believer and Black Clock among others.  She has been a regular commentator on National Public Radio’s “All Things Considered.”   She currently resides in Riverside, Calif. and teaches creative writing at the University of California there.