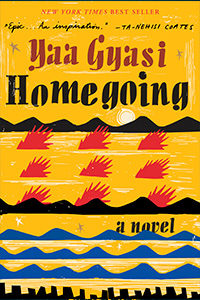 Yaa Gyasi is the author of Homegoing, one of the most talked-about books of 2016. Not only did Homegoing spark a bidding war that led to a seven-figure deal, it landed at the top of nearly every “best of” reading list for 2016. Homegoing has been shortlisted for The 2016 Center for Fiction First Novel Prize. Yaa was born in Mampong, Ghana, raised in Huntsville, Alabama and is one of the National Book Foundation’s “5 under 35” honorees for 2016. She received her MFA from the Iowa Writers’ Workshop. Her short stories have appeared in African American Review, Guernica and Callaloo. Yaa recently relocated to New York City from Northern California.

“”Homegoing [is a] hypnotic debut novel by Yaa Gyasi, a stirringly gifted young writer.” – The New York Times. “Homegoing is in a league of its own, contemporary and complex and astoundingly assured.”- Toronto Star