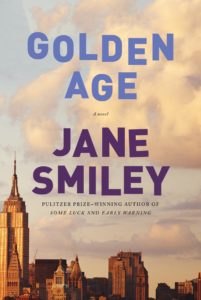 Jane Smiley is one of America’s most admired and prolific writers.  Her numerous novels include The Age of Grief, The Greenlanders, Ordinary Love and Good Will, A Thousand Acres, Moo, Horse Heaven, Good Faith, Ten Days in the Hills, and Golden Age, the final volume in her trilogy, which also includes Some Luck and Early Warning. In addition, she has written five works of nonfiction; five young adult novels, as well as essays in magazines like Vogue, The New Yorker, Harper’s, and others. She won an O. Henry Award for her short story “Lily.” and a Pulitzer Prize and the National Book Critics Circle Award for A Thousand Acres. She was elected a member of The American Academy of Arts and Letters in 2001, won the PEN USA Lifetime Achievement Award in 2006, and chaired the judges’ panel for the prestigious Man Booker International Prize in 2009. She obtained a BA in literature at Vassar College, and an MA, MFA, and PhD from the University of Iowa. From 1981 to 1996 she was a Professor of English at Iowa State University.

The Pittsburgh Post-Gazette said, “The term Golden Age may well refer to this stage of Ms. Smiley’s career, for her trilogy is thoroughly radiant.” The Los Angeles Times said, “. . . a satisfying if solemn finale to a monumental portrait of an American family and an American century.”