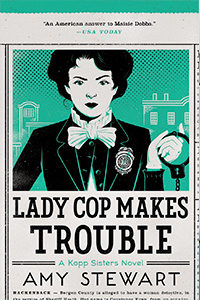 Amy Stewart’s new novel, Lady Cop Makes Trouble, is the second in the hit series based on the true story of three sisters in the 1910’s. She has also published six non-fiction books about the natural world, including The Drunken Botanist. She’s written for The New York Times and The Washington Post, and appeared on NPR’s Morning Edition and Fresh Air, CBS Sunday Morning, and Good Morning America. She is the recipient of a National Endowment for the Arts fellowship, the American Horticulture Society’s Book Award, and an International Association of Culinary Professionals Food Writing Award. In 2012, she was invited to be the first Tin House Writer-in-Residence. Amy lives in Eureka, California, where she and her husband own an independent bookstore, Eureka Books. She has an MS from the University of Texas at Austin.