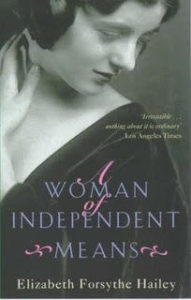 Elizabeth Forsythe Hailey studied at the Sorbonne in Paris and received her Bachelor’s Degree from Hollins College, now Hollins University in 1960. She worked briefly in journalism and publishing before writing for film and television, most notably as a creative consultant for the popular television series Mary Hartman, Mary Hartman.