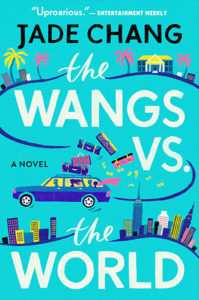 Jade Chang’s debut novel, The Wangs vs. the World, is the hilarious and poignant rags-to-riches-to-rags again tale of entrepreneur Charles Wang. It follows his unlikely odyssey across America, as he reconnects with his children in ways he never could when he was rich. The Wangs vs. the World was a New York Times Book Review Editors’ Choice, an Indie Next List selection, and The Millions Most Anticipated Book.

Chang has worked as an arts and culture journalist and editor for the BBC, Metropolis, Glamour, and the Los Angeles Times Magazine. She has also been an editor at Goodreads. Chang is the recipient of a Sundance Arts Journalist fellowship. She lives in Los Angeles.

“Jade Chang is unendingly clever in her generous debut novel.” – The New York Times. “Jade Chang’s firecracker of a debut knowingly and refreshingly breaks every unwritten rule of the Asian-American family saga, making for a blistering, high-energy read that’s worthy of its prepublication hype.” – Newsday