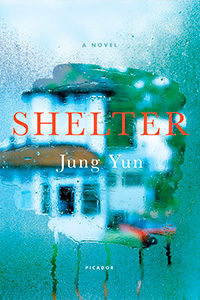 Jung Yun’s debut novel, Shelter, was named BuzzFeed‘s “#1 Most Buzzed About Book of 2016 So Far.” She was born in Seoul, South Korea, and grew up in Fargo, North Dakota. She received her MFA from the University of Massachusetts at Amherst. Jung’s work has appeared in Tin House, The Best of Tin House: Stories, edited by Dorothy Allison, and The Massachusetts Review. She has received two Artist’s Fellowships in fiction from the Massachusetts Cultural Council and an honorable mention for The Pushcart Prize. She lives in Baltimore and is an assistant professor of English at George Washington University.

“Like the writer’s version of a no-hitter, Shelter is a marvel of skill and execution, tautly constructed and played without mercy.” – Los Angeles Times