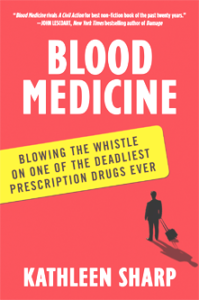 Kathleen Sharp is an acclaimed author and award-winning investigative journalist.  She is the author of the true-life thriller, Blood Medicine: Blowing the Whistle On One of the Deadliest Prescription Drugs Ever, in addition to four acclaimed non-fiction books.  She has written for the New York Times Magazine, Parade, Elle, Playboy and Fortune, among many others.  She has produced segments for National Public Radio’s Morning Edition, and appeared and consulted on film documentaries for Turner Classic Movies, the Biography Channel and Bravo.  Sharp has also contributed to several anthologies including one that was nominated for an Edgar Award.  Her many awards include a first place prize for investigative reporting from the Society of Professional Journalists, a fellowship to study at the Graduate School of Business at the University of Washington, and a health-care fellowship from the University of Southern California’s Annenberg School for Communication.  She is an avid runner and lives in Santa Barbara with her family.