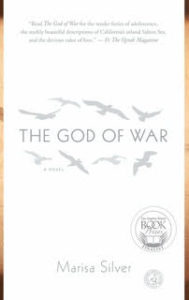 Marisa Silver  started her career as a screenwriter and film director, later switching to a prolific writing career with her fiction debut in The New Yorker when she was featured in that magazine’s first “Debut Fiction” issue. Her fiction has been included in The Best American Short Stories, the O. Henry Prize Stories, as well as other anthologies. Her first collection of short stories, Babe in Paradise (2001) was named a New York Times Notable Book of the Year and was a Los Angeles Times Best Book of the Year. A story from the collection was included in The Best American Short Stories 2000. Her next novel, No Direction Home, was followed by The God of War (2008), a finalist for the Los Angeles Times Book Prize for fiction. Her second short-story collection, Alone with You, was published in 2010 with The New York Times calling her “one of California’s most celebrated contemporary writers.” Silver’s third novel, Mary Coin (2013) is a New York Times Bestseller and winner of the Southern California Independent Bookseller’s Award. Her most recent work, a novel titled Little Nothing, was released in 2016. In 2017, Silver was awarded a Guggenheim Fellowship.      (197 words)