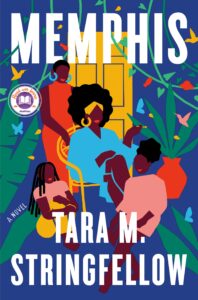 Memphis celebrates the resilience of women over multiple generations in a Black matrilineal family. In her compassionate and vivid debut, Stringfellow paints a romantic picture of Memphis, even as she lays bare its history of racism and violence. Memphis was a national bestseller and Read With Jenna Today Book Club Pick. Stringfellow has been nominated for two Pushcart Prizes. She earned her BA and MFA at Northwestern University, and her JD at Chicago-Kent College of Law. She lives in Memphis.

“A rhapsodic hymn to Black women.”—The New York Times Book Review. “Stringfellow has created an irresistible family in the Norths, who are sure to be beloved by readers for the ways in which they persevere.” – BookPage