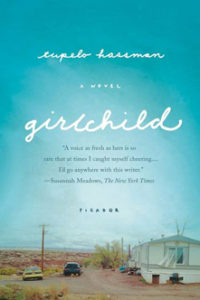 Tupelo Hassman’s first novel, Girlchild, is a winner of the 2013 Alex Award, an NPR 2012 Favorite Book, a finalist for the VCU Cabell First Novelist Award, was shortlisted by the Center for Fiction for the Flaherty-Dunnan First Novel Prize 2012, and is now available in paperback.  Tupelo’s work has appeared in The Boston Globe, Harper’s Bazaar, Imaginary Oklahoma, The Independent, The Portland Review Literary Journal, and by 100WordStory.org, FiveChapters.com and Invisible City Audio Tours among others.  More is forthcoming from Girls on Fire:  Stories of and for Teen Girls.  Tupelo was the first American to win London’s Literary Death Match.  She lives in San Francisco’s East Bay.