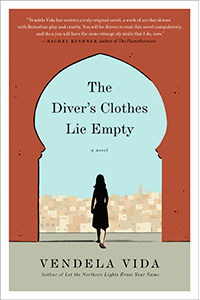 Vendela Vida is the author of The Diver’s Clothes Lie Empty, And Now You Can Go and Let the Northern Lights Erase Your Name, the last two novels named as The New York Times Notable Books of the Year. She received the 2007 Kate Chopin Writing Award and is a founding coeditor of The Believer magazine and the editor of The Believer Book of Writers Talking to Writers. Vendela is a long-term board member and teacher at 826 Valencia, a non-profit organization that teaches creative writing to children. She was nominated in 2009, along with Dave Eggers, for Best Original Screenplay by the Chicago Film Critics Association for Away We Go. Vendela has an MFA from Columbia University. She lives in the San Francisco Bay Area with her husband and children.

The New York Times said of The Diver’s Clothes Lie Empty, “With its echoes of Hitchcock and Highsmith, this novel is full of darting pleasures.” “Unequivocally a thriller, but more movingly, a meditation on identity.” – Vanity Fair